Biodiversity is the occurrence of different types of ecosystems, different species of organisms with the whole range of their variants and genes adapted to different climates, environments along with their interactions and processes.

Effects of loss of biodiversity are:

• The loss of biodiversity leads to depletion of genetic diversity.
• The loss of both genetic and ecosystem diversities result in a loss of cultural diversity.
• The alteration of the habitat results in mass extinction of particularly the endemic species.
• The loss of a species can have deleterious effects on the remaining species in an ecosystem which lead to breakdown of biodiversity.
• Reduced biodiversity means millions of people face a future where food supplies are more vulnerable to pests and disease and where water is in irregular or short supply.
• The loss of plant species also means the loss of unknown economic potential, as extinct plants can hardly be harvested for food crops, fibers, medicines, and other products that forests, especially rainforests, provide.

The biodiversity conservation methodology is divided as In-situ and Ex-situ. 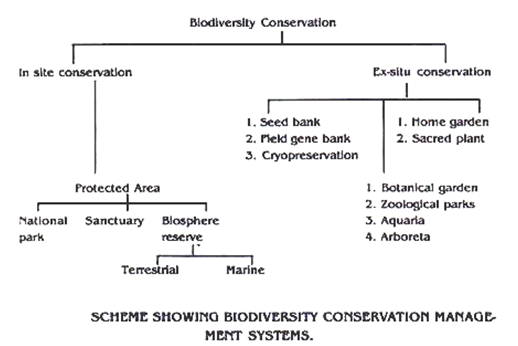 In-situ methods of conservation of biodiversity

These are areas of land and/or sea especially dedicated to the protection and maintenance of biological diversity, and of natural and associated cultural resources. These are managed through legal or other effective means. Examples of protected areas are National Parks, and Wildlife Sanctuaries.

Some of the main benefits of protected areas are: (1) maintaining viable populations of all native species and subspecies; (2) maintaining the number and distribution of communities and habitats, and conserving the genetic diversity of all the present species; (3) preventing human-caused introductions of alien species; and (4) making it possible for species/habitats to shift in response to environmental changes.

Biosphere reserves are internationally recognized, nominated by national governments and remain under sovereign jurisdiction of the states where they are located.

o Buffer Zones: These areas must be clearly identified, and usually surround or adjoin the Core Areas. Buffer Zones may be used for cooperative activities compatible with sound ecological practices, including environmental education, recreation, ecotourism and applied and basic research.

o Transition, or Cooperation, Zones: These areas may contain towns, farms, fisheries, and other human activities and are the areas where local communities, management agencies, scientists, non-governmental organizations, cultural groups, economic interests, and other stakeholders work together to manage and sustainably develop the area’s resources.

Each biosphere reserve is intended to contribute to the conservation of landscapes, ecosystems, species and genetic variation; to foster economic and human development which is socio culturally and ecologically sustainable; to provide support for research, monitoring, education and information exchange related to local, national and global issues of conservation and development.

A national park is a reserve of natural or semi-natural land, declared or owned by a government, which is restricted from most development and is set aside for human recreation and environmental protection. Visitors are allowed to enter, under special conditions, for inspirational, educative, cultural, and recreative purposes.

An area, usually in natural condition, which is reserved (set aside) by a governmental or private agency for the protection of particular species of animals during part or all of the year. An area designated for the protection of wild animals, within which hunting and fishing is either prohibited or strictly controlled. It is maintained by the state government.

A traditional strategy for the protection of biodiversity has been in practice in India and some other Asian countries in the form of sacred forests. These are forest patches of varying dimensions protected by tribal communities due to religious sanctity accorded to these forest patches. In India sacred forests are located in several parts, e.g. Karnataka, Maharashtra, Kerala, Meghalaya, etc., and are serving as refugia for a number of rare, endangered and endemic taxa. Similarly, several water bodies (e.g. Khecheopalri Lake in Sikkim) have been declared sacred by the people leading to protection of aquatic flora and fauna.

Ex-situ methods of conservation of biodiversity

Ex-situ conservation is the preservation of components of biological diversity outside their natural habitats.  This involves conservation of genetic resources, as well as wild and cultivated or species, and draws on a diverse body of techniques and facilities.  Some of these include:

Botanic gardens can be defined as “public gardens which maintain collections of live plants mainly for study, scientific research, conservation and education.

• to rehabilitate indigenous and threatened species and restore them to  protected portions of their former habitats;
• to exploit commercially those species which are plentiful; and
• to promote wildlife education to a broad range of target groups such as politicians, school and college students, and communities living in and around wildlife areas.

Sometimes conservation of faunal species involves or necessitates translocation of animals. This means the movement of individuals from its natural habitat, or from captivity, to another habitat. Translocations are carried out in connection with introductions or reintroductions, and should be handled with extreme caution.
These operations are carried out often with support from international captive breeding programs and receive the cooperation of zoos, aquaria, etc.

Artificial insemination, or AI, is the process by which sperm is placed into the reproductive tract of a female for the purpose of impregnating the female by using means other than sexual intercourse or natural insemination.

Somatic Cell Cloning holds some promise for propagating from one or a few survivors of an almost extinct species. The nucleus of a somatic cell is removed and kept, and the host’s egg cell is kept and nucleus removed and discarded. The lone nucleus is then fused with the ‘deprogrammed’ egg cell. After being inserted into the egg, the lone (somatic-cell) nucleus is reprogrammed by the host egg cell. The egg, now containing the somatic cell’s nucleus, is stimulated with a shock and will begin to divide.

Reintroduction of an animal or plant into the habitat from where it has become extinct is another form of ex situ conservation. For example, the Gangetic gharial has been reintroduced in the rivers of Uttar Pradesh, Madhya Pradesh and Rajasthan where it had become extinct.

Species based programmes for conservation of biodiversity

The species based conservation programmes in India are:

Tigers are terminal consumers in the ecological food pyramid, and their conservation results in the conservation of all trophic levels in an ecosystem.

Project Tiger is a Centrally Sponsored Scheme of Government of India which was launched on the 1st of April, 1973 for in-situ conservation of wild tigers in designated tiger reserves.

The project aims at ensuring a viable population of Bengal tigers
in their natural habitats and also to protect them from extinction, and preserving areas of biological importance as a natural heritage forever represented as close as possible the diversity of ecosystems across the tiger’s distribution in the country. }

The Asiatic Lion Reintroduction Project is an effort to save the Asiatic lion
from extinction in the wild. The last wild population in the Gir Forest region of the Indian state of Gujarat is threatened by epidemics, natural disasters and anthropogenic factors. The project aims to establish a second independent population of Asiatic Lions at the Kuno Wildlife Sanctuary in the Indian state of Madhya Pradesh.

Snow leopards live in the mountain regions of central Asia. In India their geographical cover encompasses a large part of the Western Himalaya including the states of Himachal Pradesh, J&K and Uttarakhand with a sizable population in Ladakh, Sikkim and Arunachal Pradesh in Eastern Himalaya. They are found at high elevations of 3000-4500 meters (9800 ft to 14800 ft.), and even higher in the Himalayas.

The Snow Leopard is listed as endangered on the IUCN-World Conservation Union’s Red List of the Threatened Species.

Keeping this in view, WWF-India initiated the project, “snow leopard conservation: An initiative”, in the states of Uttarakhand (UK) and some of the areas of Himachal Pradesh (HP) to conserve biodiversity with community participation.