1— While the report projects the world population to some 9.7 billion by 2050, it says the overall growth rate will continue to fall. The next 30 years will see the population add 2 billion people to today’s 7.7 billion, and reach 11 billion by the end of the century. The countries expected to show the biggest increase are India, Nigeria and Pakistan.

However, fertility rates are falling worldwide. The average number of births per woman globally, from 3.2 in 1990, fell to 2.5 by 2019, and is projected to fall further to 2.2 births by 2050. To avoid decline in a national population, a fertility level of 2.1 births per woman is necessary (in the absence of immigration). 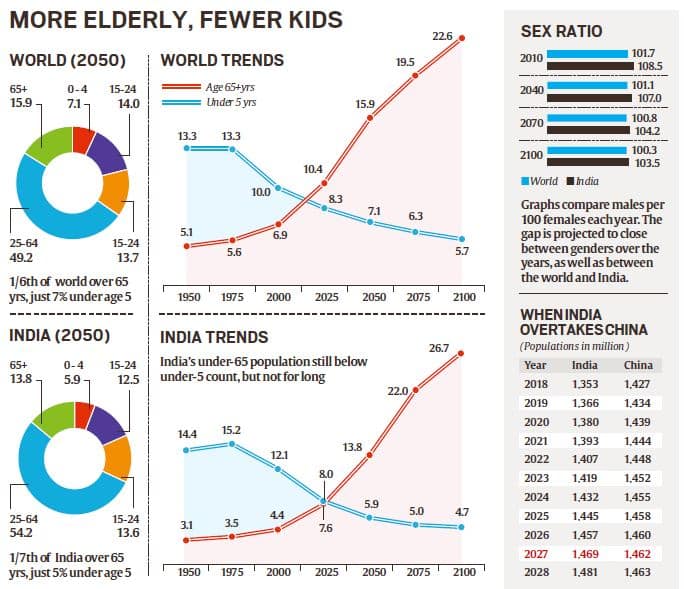 3— Although overall life expectancy will increase (from 64.2 years in 1990 to 77.1 years in 2050), life expectancy in poorer countries is projected to continue to lag behind. Today, the average lifespan of a baby born in one of the least developed countries will be some 7 years shorter than one born in a developed country, the report said. The main reasons cited in the report are high child and maternal mortality rates, conflict and insecurity, and the continuing impact of the HIV epidemic.

4— The populations of 55 countries are projected to decrease by 1% or more between 2019 and 2050 because of sustained low levels of fertility, and, in some places, high rates of emigration. The largest relative reductions in population size over that period, with losses of around 20% or more, are expected in Bulgaria, Latvia, Lithuania, Ukraine, and the Wallis and Futuna Islands.

Migration flows have become a major reason for population change in certain regions, the report said. Bangladesh, Nepal and the Philippines are seeing the largest migratory outflows resulting from the demand for migrant workers; and Myanmar, Syria and Venezuela are the countries where the largest numbers are leaving because of insecurity or conflict, it said.

5— Males are projected to continue to outnumber females until the end of the century, but the gap will close.