The biotic factors of the ecosystem are linked together by food. For example, the producers form the food for the herbivores; the herbivores form the food for the carnivores. The sequence of the eaters being eaten is called food chain. “Food chain is the sequence of who eats whom in a biological community (ecosystem) to obtain nutrition” or in another words the transfer of energy in an ecosystem through a series of organisms, by eating and being eaten, constitutes food chains. The position of organisms in the food chain or each step of the food chain is referred as Trophic level. There are two types of food chain.

This food chain starts from producers, passes through herbivores, then to carnivores and decomposers.

This chain begins with dead organic matter and ends up with inorganic compounds. There are certain organisms which depend exclusively on the dead bodies of animals and plants. These organisms are called detritivores.

The various food chains in an ecosystem are interconnected or interlinked with each other to form a network called food web. If the links in the chains that make up the web of life are disrupted due to human activities that lead to the loss or extinction of species, the web breaks down. 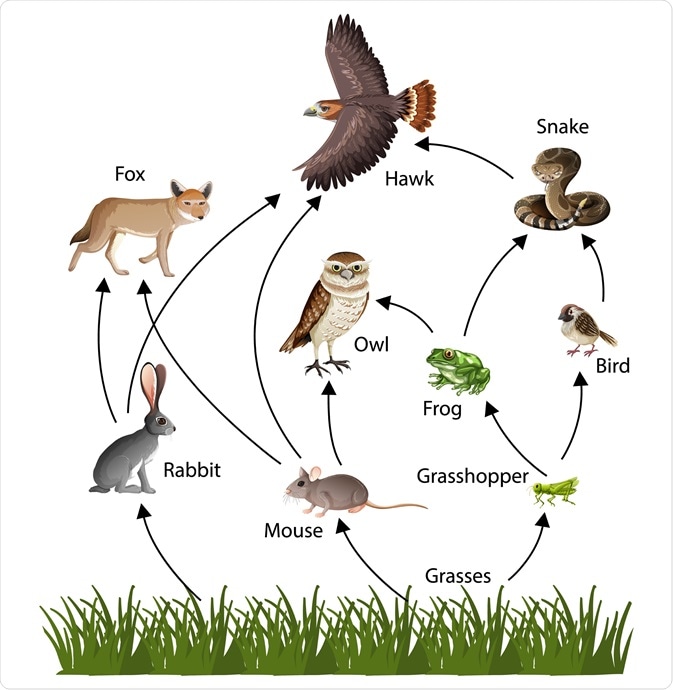 Food webs are very important in maintaining the stability of an ecosystem. For example, the deleterious growth of grasses in a grass land is controlled by the herbivores. When one type of herbivore becomes extinct, the other types of herbivores increase in number and control the vegetation. Similarly, when one types of herbivorous animal becomes extinct, the carnivore predating of this type may eat another type of herbivore. Thus, the existence of a food web denotes the self-sustaining capacity of an ecosystem. Some species, if eliminated, seriously affect the ecosystem. These are called keystone species.