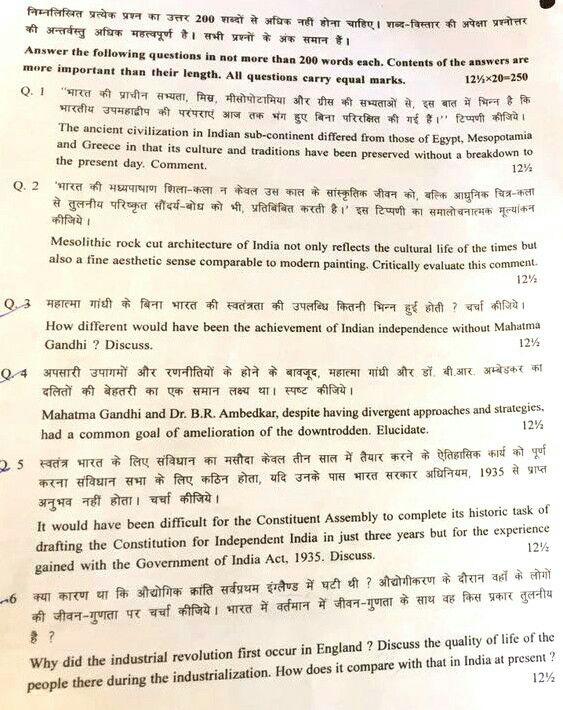 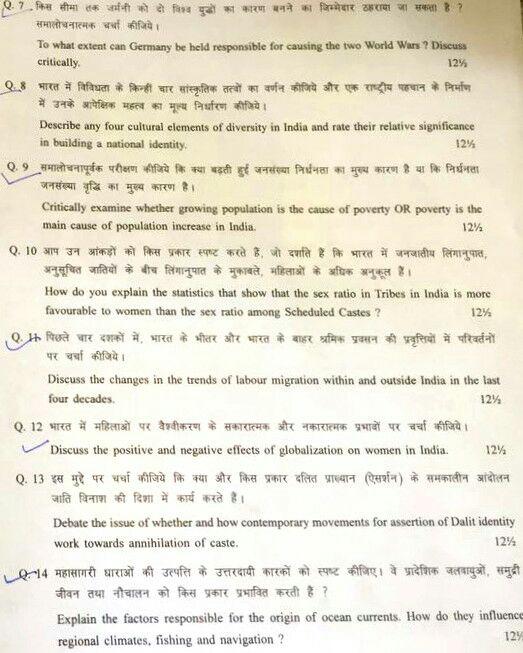 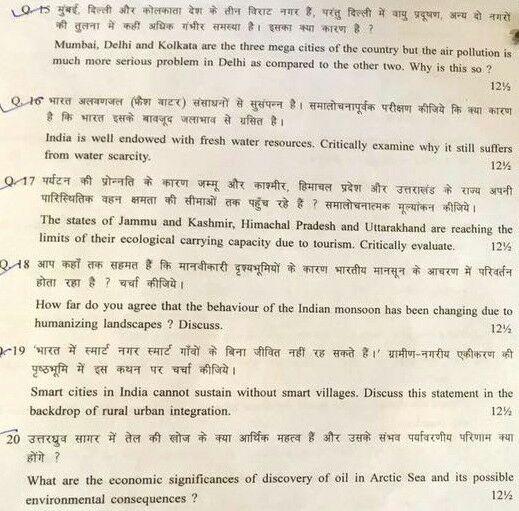 Links to answer the above questions: (More will be uploaded shortly)
Q.No.1- Ancient Civilization of indian Subcontinent & Basic Feature of Ancient Civilization
Q.No. 2 – All about Mesolithic Art & Modern Indian Painting
Q.No.6- All about Industrial Revolution
Q.No.9- Population and Poverty
Q.No.12- Effects of Globalization on women
Instructions: Answer the following questions in not more than 200 words each.
Contents of the answers are more important than their length. All questions carry
equal marks. Note: Each question carries 12.5 Marks (12.5×20 = 200 Marks)
1. The ancient civilization in Indian sub-continent differed from those of Egypt,
Mesopotamia and Greece in that its culture and traditions have been preserved without
breakdown to the present day. Comment (12.5M)
2. Mesolithic rock cut architecture of India not only reflects the cultural life of the times
but also a fine aesthetic sense comparable to modern painting. Critically evaluate this
comment. (12.5M)
3. How difficult would have been the achievement of Indian independence without
Mahatma Gandhi? Discuss.
4. Mahatma Gandhi and Dr. B R Ambedkar, despite having divergent approaches and
strategies, had a common goal of amelioration of the downtrodden. Elucidate. (12.5M)
5. It would have been difficult for the Constituent Assembly to complete its historic task
of drafting the Constitution for Independent India in just three years, but its experience
gained with the Government of India Act, 1935 .Discuss. (12.5M)
6. Why did the industrial revolution first occur in England? Discuss the quality of life
of the people there during the industrialization. How does it compare with that in India
at present times?
7. To what extend can Germany be held responsible for causing the two World Wars?
Discuss critically.
8. Describe any four cultural elements of diversity in India and rate their relative
significance in building a national identity.
9. Critically examine whether growing population is the cause of poverty OR poverty is
the mains cause of population increase in India.
10. How do you explain the statistics that show that the sex ratio in Tribes in India is
more favourable to women than the sex ratio among Scheduled Castes?
11. Discuss the changes in the trends of labour migration within and outside India in the
last four decades.
12. Discuss the positive and negative effects of globalization on women in India?
13. Debate the issue whether and how contemporary movements for assertion of Dalit
identity work towards annihilation of caste.
14. Explain the factors responsible for the origin of ocean currents. How do they
influence regional climates, fishing and navigation?
15. Mumbai, Delhi and Kolkata are the three Mega cities of the country but the air
pollution is much more serious problem in Delhi as compared to the other two. Why is
this so?
16. India is well endowed with fresh water resources. Critically examine why it still
suffers from water scarcity.
17. The states of Jammu and Kashmir, Himachal Pradesh and Uttarakhand are reaching
the limits of ecological carrying capacity due to tourism. Critically evaluate.
18. How far do you agree that the behaviour of the Indian monsoon has been changing
due to humanizing landscape? Discuss.
19. Smart cities in India cannot sustain without smart villages. Discuss this statement in
the backdrop of rural urban integration.
20. What are the economic significances of discovery of oil in Arctic Sea and its possible
environmental consequences?

Government plans ‘I stand by my country’ campaign