Types of Interactions
• Neutralism, in which neither population is affected by association with the other. Ex: Rabbits, deer, frogs, live together in a grassland with no interaction between them.
• Amensalism, is a negative association between two species in which one species harms or restricts the other species without itself being adversely affected or harmed by the presence of the other species. Organisms that secrete antibiotics and the species that get inhibited by the antibiotics are examples of amensalism.
• Commensalism, in which one population is benefited, but the other is not affected. Ex: sucker fish, remora often attaches to a shark by means of its sucker which is present on the top side of its head. This helps the remora get protection, a free ride as well as meal from the left over of the shark’s meal (Fig. 4.18). The shark does not however get any benefit nor is it adversely affected by this association.
• Parasitism in which one species is harmed and the other benefits. Parasitism involves parasite usually a small size organism living in or on another living species called the host from which the parasite gets its nourishment and often shelter. The parasite is benefited and the host is harmed.
• Predation in which predator captures, kills and eats an animal of another species called the prey. The predator naturally benefits from this relationship, while the prey is harmed. Predators like leopards, tigers and cheetahs use speed, teeth and claws to hunt and kill their prey.
• Proto-cooperation (also frequently referred to as facultative cooperation), in which both populations benefit by the association but their relations are not obligatory; and
• Mutualism in which the growth and survival of both populations is benefited, and neither can survive under natural conditions without the other.
• Competition is an interaction between two populations in which both species are harmed to some extent. Competition occurs when two populations or species, both need a vital resource that is in short supply. The vital resource could be food, water, shelter, nesting site, mates or space. Such competition can be: (i) interspecific competition-occurring between individuals of two different species occurring in a habitat and (ii) intraspecific competition-occurs between individuals of same species.
• Symbiosis is the interaction in which the species can no longer live without each other as they depend totally on each other to survive. 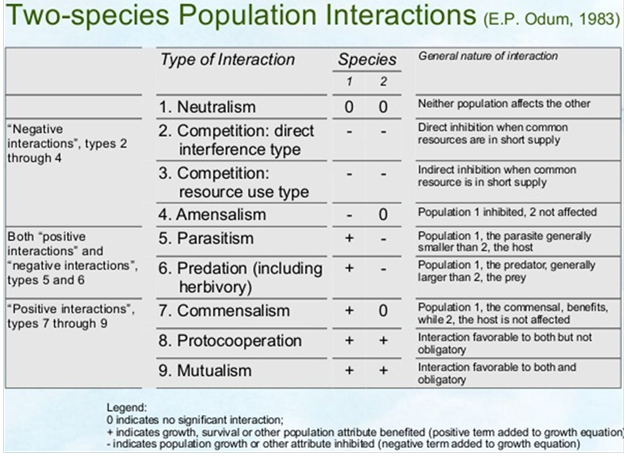